I hope you’re having a good week. We have been busy these last few days around our place. While my daughter Reese turned 16 on Sunday, she can’t get her license just yet, so we’re all safe for now. In seriousness, I’m ok with us waiting a bit, as a beginning driver has no business learning in the middle of an Illinois winter. One thing I’ve been working on of late is trying to get a field cultivator bought. If you’ve priced them recently, you know what I mean. I bought my first one about 25 years ago…a 44 ½ foot DMI. We still use it, but it’s getting a bit tired. The problem is, I believe I paid around 35k for it, and now to trade to a new ‘floating hitch’ field cultivator that’s a little bigger at 54 feet…it’s going to cost me over 100k including the trade. Ouch! Regardless of what you have going on, I’d sure like to hear about it. Maybe you have a better deal on a fc! Shoot me an e-mail if you get the time. mbennett@agmarket.net

The corn and bean markets were taking it on the chin in the overnight market. With Tuesday’s return from the three-day-weekend also in the red, we saw continued selling through most of the overnight market. The day session started with markets coming off their lows and buying through the session brought corn close to unchanged with beans down just a nickel. However, as the market worked towards the close, selling came back and we saw beans settle in the middle of the range while corn was well into the upper-half. Rain in South America as well as a better forecast seems to have prompted the sell-off, which has been exacerbated by profit-taking as the market was certainly overbought. Outside markets were likely a positive in their contribution to our ag markets on Wednesday. March crude was up 28 cents on the day, closing at $53.26. The Dollar was quiet, settling at 90.476. The DOW ended the day 257 points higher, setting at 31,188.

Corn – The corn market was getting smoked on the overnight markets before rallying back close to unchanged. On the close, we’d backed off and March 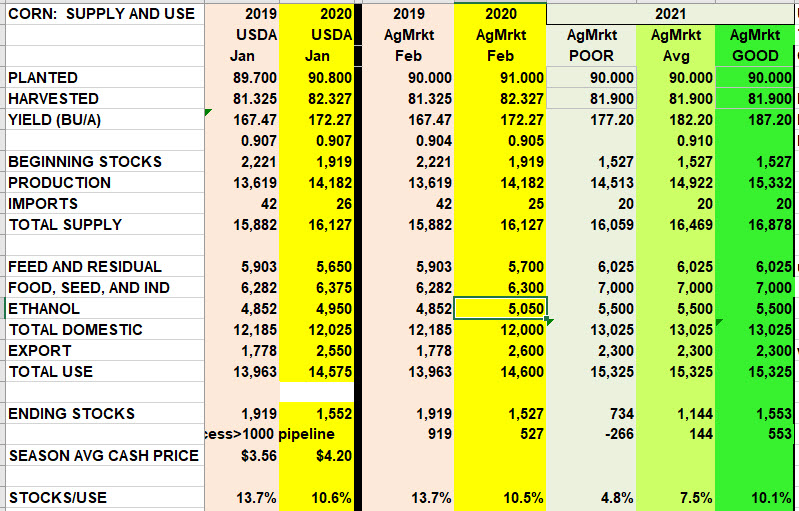 corn settled four cents lower at $5.22. This was 4 ½ cents off the high and 9 ¼ off the low of the day. There was no EIA report from the Department of Energy due to the holiday-shortened week. In all honesty, there wasn’t a ton of news here at midweek. Most of the talk around this corn market centers around weather in South America. While improving rains as well as a better forecast for the dry areas of Brazil and Argentina have provided headwinds, there are still areas of concern. It’s tough to gauge how much impact it may have on corn prices as US carry is thought to be much tighter than the USDA’s 1.55 bil. bu. We can’t forget how overbought this market has been of late. We likely saw some weak longs exit on this pullback, which should give the market a fresh run at some upside in the event we see good demand news or a change in the South American weather forecast to something more ominous. I’m not bearish corn, but I sure can’t argue with anyone selling any old or new. These are solid prices when it comes to profitability.

Soybeans – Soybeans had a tough overnight session where losses mounted to over 30 cents before seeing some buying shore things up. March beans rallied back close to the midway point, down 16 ¼ cents at $13.69. The close was 15 cents off the high and 17 ½ off the low of the day. The bean market has finally sold off a bit as some length is shed from the very overbought conditions we’ve seen of late. As with corn, much talk about South American weather is in and around this bean market. Also similar to corn are thoughts this bean carry might keep prices from dropping too much. Yes, we’ve seen a heckuva sell-off, but no major technical damage has been done just yet. With all this being said, a person has to wonder just how bullish a producer should be at $13-$14 beans. My personal opinion is beans have another good run or two in them. As a producer, I look forward to extending sales on a run over $12 fall-delivery.  Base your decisions on profit margins as always…it will keep you from trying to outguess a market that is next to impossible to outguess.