Despite all the bearish talk below, we want to point out that the buyer of our commodities corn market is near contract highs . This is now HIGHER than our $4.40 market last year.  There is no reason to be overly bearish at this time of year. 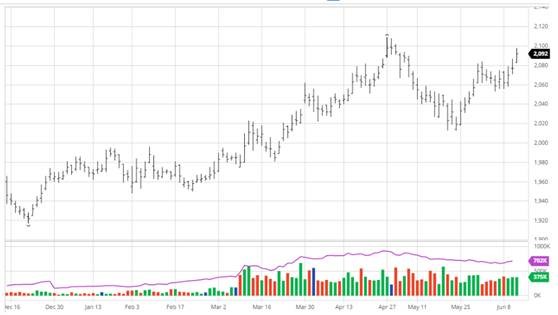 Overnight trade has SRW down roughly 3 cents, HRW down 1; HRS Wheat up 1, Corn is mixed/steady; Soybeans up 1, Soymeal unchanged, and Soyoil up 10 points.

Malaysian palm oil prices were down 21 ringgit at 2,345 (basis August) at midsession on ideas of higher June palm oil production.

Last night’s GFS model run was notably drier in much of the Corn Belt, Delta, and a large portion of the Hard Red Winter Wheat Region Jun. 21 – 26; the decreases were due to the model keeping a ridge of high pressure strong and persistent over these regions.

U.S. exporters reported sales of 720,000 tons of soybeans to China, the U.S. Department of Agriculture (USDA) said on Thursday, as active purchases by the world’s top soy importer continued for a second straight week; the USDA confirmed the sales after reporting that weekly U.S. soybean export sales last week were the largest in at least 16 months, with the majority slated for shipment to China or undisclosed destinations widely believed to be China; China has been ramping up U.S. soybean purchases as supplies in Brazil, China’s top soy supplier, are tightening and Brazil’s strengthening currency has driven up prices

With weather risks remaining, global wheat prices will likely continue to trade in the current range over the next four to six weeks, Rabobank says; if the U.S. Department of Agriculture forecasts a bigger surplus in 2021 then the Chicago Board of Trade contract may have a hard time trading above its current level; Rabobank points out that the USDA’s forecast of an increase in wheat production by 11 million bushels to 1.877 billion bushels for 2020-21 was unexpected

A strong planting season for U.S. corn is expected to lead to a record-high supply, as demand for the crop remains muted thanks to the fallout from the coronavirus pandemic; ending stocks of corn–unsold corn left over after the marketing year is done–are expected to total 3.32 billion bushels in 2020/21, the U.S. Department of Agriculture said in its monthly supply and demand estimate report; that figure is 58% higher than last year’s ending stocks; in the report, a reduction in demand for corn to make ethanol is the key factor driving stockpiles higher; corn used for ethanol is lowered reflecting a slower-than-expected rebound in ethanol production; production is also at a record high, with the USDA maintaining its forecast from last month at 15.99 billion bushels; that’s up more than 2.3 billion bushels from last year’s total, the result of a record 97 million acres planted this year

A leading U.S. biofuel trade group said it had started conversations with the campaigns of both Democratic presidential candidate Joe Biden and incumbent Donald Trump to discuss potential policy fixes for the ailing industry; the discussions come as the coronavirus pandemic crushes demand for ethanol and other biofuels, and as the industry wages a long-running lobbying effort to strengthen government biofuel consumption mandates that it says have been weakened by Trump’s Environmental Protection Agency; the biofuel industry, an important farmbelt constituency, is hoping to use its political clout ahead of the upcoming November election to press its list of demands in Washington.

For the week ended June 4th, U.S. All Wheat sales are running 5% behind a year ago, shipments down 55% with the USDA forecasting a 2% decline on the year

For the week ended June 4th, U.S. Corn sales are running 15% behind a year ago, shipments 27% behind with the USDA forecasting a 14% decline.

For the week ended June 4th, U.S. Soybean sales are running 7% behind a year ago, shipments 2% ahead with the USDA forecasting a 6% decline on the year

—Soymeal sales 3% behind on the year, shipments down 2% with a 1% decrease forecasted

—Soyoil sales 52% ahead of a year ago, shipments 47% ahead with a 39% increase forecasted

US ranchers will produce 26,674 million pounds of beef this year, the WASDE projects as it raises last month’s forecast of 25,764 million pounds; meatpackers are resuming slaughtering after shutting down because of the coronavirus pandemic; the increased projection largely reflects a faster-than-anticipated recovery in the pace of slaughter

Beijing will honor its trade deal with the U.S. and wants to see better ties with Washington, senior Chinese officials said; Zhu Guangyao, a former finance minister and Cabinet advisor, said the two countries should “waste no time” in improving relations to help better coordinate a response to the coronavirus pandemic; he and other officials told reporters in Beijing that the two biggest economies are so closely entwined that they must find a way to work together because a lack of cooperation has come at a “high price.”; the close connection between the Chinese and U.S. economies is the result of four decades of hard work on both sides, and that is also the reflection of the wishes of consumers in China and the United States

The Chinese Academy of Agricultural Sciences has launched a program to facilitate the breeding of high-protein corn varieties and promote the healthy development of animal husbandry; corns are used as raw material of animal feed, and their nutritional quality directly affects the yield and quality of livestock and poultry products

China’s domestic soybean market has been incredibly strong, but it has been difficult to find a fundamental reason to explain why, says INTL FCStone; one theory is that food-grade non-GMO domestic soybean supply has been tighter than normal because the Chinese government was stricter in 2019 in tracking where GMO soybean imports were going once they came into China; imports of non-GMO food-grade soybeans have been small, and maybe the higher prices will lead to China importing more

Argentina’s recently completed 2019/20 soy harvest is estimated at 49.6 million tons, a touch higher than a previously estimated 49.5 million tons, the Buenos Aires Grains Exchange said in its weekly crop report; as of Wednesday, the soy harvest was 99.4% complete

—Regarding 2020/21 wheat, which is currently being sown in Argentina, the report said recent dryness in northern and western growing areas was putting downward pressure on the exchange’s current planting estimate of 6.8 million hectares

—A planned bid by Glencore to buy out the remaining stake in its Argentine soy crushing joint venture Renova will likely be scuttled by the government’s plan for a state takeover of bankrupt partner Vicentin; however, the government’s planned takeover of Vicentin, which holds 33% of Renova alongside majority partner Glencore, should not dent agricultural exports from Argentina

—Kazakhstan, central Asia’s largest grain producer, is expected to export 7.2 million tonnes of wheat, including flour, with a 17% growth in the crop to 13.4 million tonnes