Chinese Ag futures (September) settled down 27 yuan in Soybeans, up 3 in Corn, unchanged in Soymeal, down 36 in Soyoil, and down 24 in Palm Oil.

The Malaysian Palm Oil market was down 25 ringgit at 1,997 (basis September) on higher production concerns.

The U.S. Midwest weather forecast will see the current wave of rainfall finishing up across the region today and then things will become significantly quieter over the next 10 days—-temps will be average to a bit below average over the next 5 days warming to above average but, no severe heat is seen.

The Southern U.S. Plains will see hit and miss rainfall activity for the region from time to time favoring more of the east—-temps will be running average to below average over the next 10 days.

The Northern U.S. Plains looks to have close to average precip over the next 10 days—-temps will be running average to a bit below for the next 5 days and then above average after that.

The U.S. Delta and Southeastern states rainfall late this week and into the weekend will be erratic and light.

Speculators’ optimism in Chicago-traded grains and oilseeds built further in the week ended June 18 as the U.S. corn and soybean crops are off to their latest-ever start, creating high uncertainty over production possibilities; but the market took a breather last week as CBOT corn futures hit a five-year high and traders weighed changes to U.S. weather forecasts, trying to figure out what they mean for the unprecedented growing season 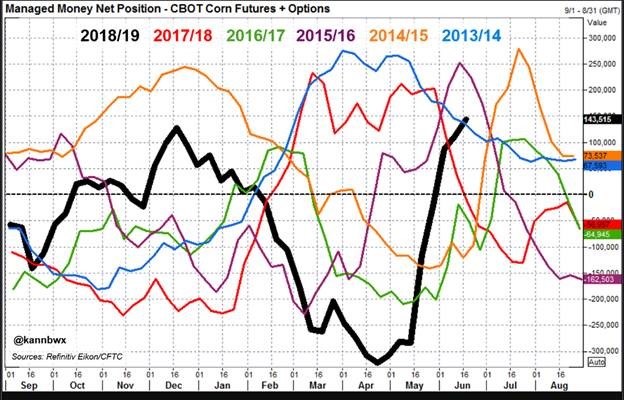 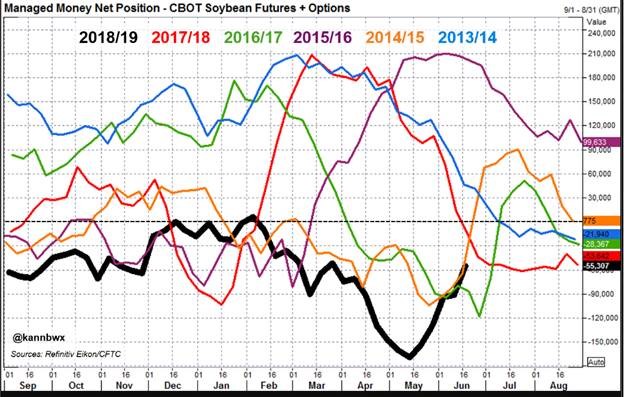 Chinese and U.S. trade negotiators are in contact on ways of resolving disputes ahead of an expected meeting between their heads of state at the G-20 summit in Japan later this week, a Chinese official said; the sides were seeking to “consolidate the important consensus reached between the two leaders” in a telephone call last week, a Commerce Ministry vice minister told reporters; gave no details about specific issues under discussion.

Adverse Weather in the US Now Affecting Also Soybean Market

—World soybean crushings will decline in July/Sept 2019, mainly on account of China; Sunflowerseed crushings are seen rising in April/June and in July/Sept

—Rising meat exports are expected to propel Brazilian soya meal usage to a record in Oct/Sept 2018/19, almost a tripling within 20 years.

—Given large processing in May we raised EU rapeseed crushings in July/June 2018/19, down on the year.

More than a quarter of Farm Belt lenders said defaults are rising on farm loans thanks to strained farm finances, according to a monthly survey by Creighton University; Creighton’s Rural Mainstreet Index, which reports conditions in 10 states from Colorado to Iowa, also showed more than two-thirds of bankers expect farm loan defaults to increase in the next year; nearly half of bankers surveyed said they’d seen farmers in their area respond to financial hardship by selling, or leaving, their farms; still, over 70% of bank CEOs said their customers support continuing or raising tariffs on agricultural trading partners

The US-China trade tensions and dueling tariffs have helped result in Chinese imports of US agricultural products sinking 55% in January-May from a year earlier to CNY32.7 billion ($4.8 billion), according to the Ministry of Agriculture and Rural Affairs; meanwhile, imports from Brazil have jumped 21% to CNY76.2 billion; but US soybean imports soared in May, cutting the year-to-date drop to 12%; it was 71% through April.

CHINA SELLS 24,993 TONNES OF RAPESEED OIL, OR 100% OF TOTAL OFFER, AT AUCTION OF STATE RESERVES

The table below shows imports of China’s major agriculture products in May 2019, according to data released by the General Administration of Customs

China’s pork imports surged nearly 63% in May from the same month last year, customs data showed as the world’s top consumer of the meat stocked up on supplies ahead of an anticipated shortage; May imports came in at 187,459 tons, the largest volume since 192,348 tons in August 2016; the increase comes as African swine fever continues to infect pigs across China, producer of half the world’s hogs, leading to a sharp fall in the size of its herd; China’s pork prices rose rapidly in the first-half of March, triggering large purchases of meat from overseas markets, including the United States; prices have since stabilized, with importers and traders saying demand in recent weeks for imported frozen pork has been very weak amid plentiful supplies of fresh pork from farmers slaughtering their herds as the disease reaches new areas.

Argentine farmers are expected to plant 6.5 million hectares of wheat in the 2019/20 season, the government said, citing good rainfall as the reason for the increase from its previous forecast of 6.46 million hectares; wheat in Argentina is planted in June and July, and harvested in December and January

—The report slightly downgraded the government’s 2018/19 soy crop estimate to 55.6 million tons from the previous forecast of 55.9 million tons

Russia’s June exports of wheat, barley and maize (corn) are estimated at 1.1 million tons, down from 1.4 million tons in May, the SovEcon agriculture consultancy said.

Russian export prices for wheat fell last week as the number of offers rose after the start of harvesting and offset risks posed by hot weather; Black Sea prices for the new Russian wheat crop with 12.5% protein content were $194 per ton on a free on board (FOB) basis at the end of last week, down $1 from a week earlier; also quoted FOB new crop for July delivery unchanged at $196 per ton; the ruble currency rose by 2% against the U.S. dollar last week.

Iraq has bought over 3.2 million tons of local wheat so far this harvesting season, which started on April 15, its trade ministry said.

India’s annual monsoon rains have covered nearly half of the country and conditions are favorable for further advancement into the central and western parts this week, a weather department official said; the monsoon’s progress will help farmers to accelerate sowing of summer-sown crops, which has been lagging due to a delay in the arrival of monsoon rains. 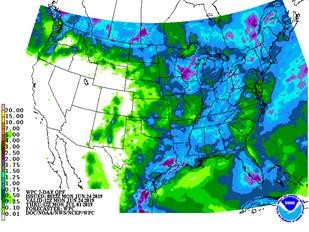 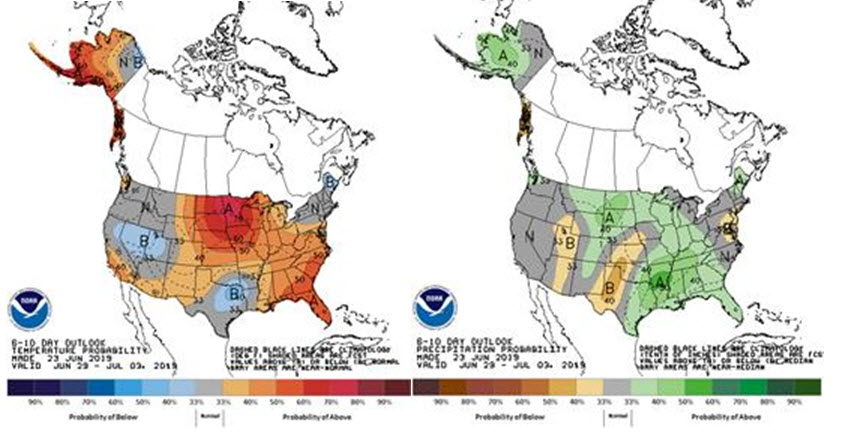 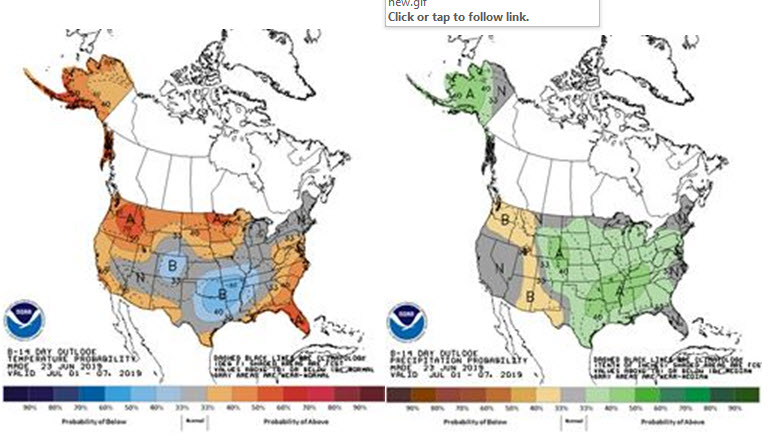