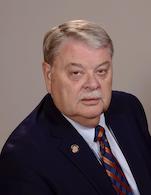 Growing up on a farm in Northern Illinois, Wayne’s love of Agriculture began at a young age.  Wayne Nelson has 48 years of experience in the Ag Industry.  After graduating from the University of Illinois with a B.S. in Agricultural Economics, he started working for Tabor Grain which was later purchased by ADM.  He has worked in grain elevators, barge loading facilities, a flour mill, and a food grade corn facility.  He also worked in feed, seed and fertilizer.  In 1978, he began working at a local elevator in Montgomery County, Indiana, which led to owning and operating L&M Commodities for the last 37 years.   Wayne has seen many changes in the industry.

Wayne is a very active member of his community.  He has served as a past president of the Crawfordsville Jaycees.  He has been president of the local FFA Ag Advisory Board for 25 years.  He volunteered for many years as the ambulance driver for the local fire department. He has been a deacon at his church.  He currently serves as the president of the Illi-Dell Scholarship Foundation.  He recently was awarded with the 2022 Alumni of Merit Award at the University of Illinois.

Wayne became the branch manager of the New Market, Indiana location of AgMarket.Net in October 2022.  Wayne works with clients to help them hedge their grain and inputs.  Wayne continues to be heard on WILL as he has been since 1988.

Wayne and his wife Becky have 3 children, 5 grandchildren and 5 great grandchildren.  They are lucky enough to live close to their family and enjoy spending time with them.