Wheat prices overnight are down roughly 4 cents in the SRW Wheat, down 1 in HRW, and down 1 for HRS; Corn is down 3 cents; Soybeans down 3; Soymeal down $1.00, and; Soyoil down 10 points.

Chinese Ag futures (September) settled down 31 yuan in Soybeans, down 9 in Corn, up 15 in Soymeal, down 4 in Soyoil, and unchanged in Palm Oil.

Latest weather forecast in the Midwest has showers and thunderstorms that will limit drying through the June 9 period but, conditions won’t be as bad as they were over the past week.

The U.S. Delta, Southeast still has a dry outlook.

President Trump said Thursday the U.S. would impose escalating tariffs on all Mexican imports beginning June 10, in an effort to push the country to deter the flow of asylum-seeking Central American families to the southern border. 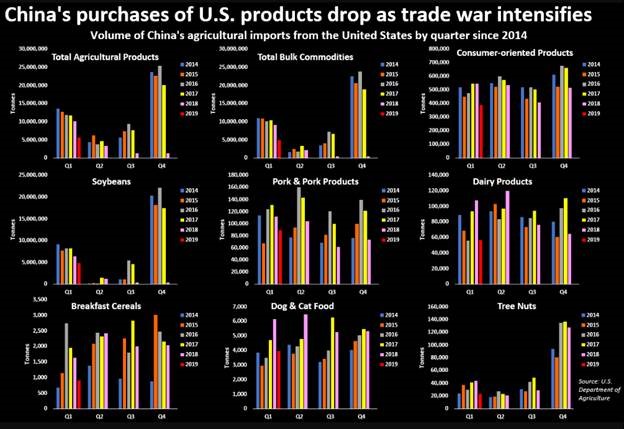 The Trump administration has decided to approve expanded use of ethanol fuel, a move that will help corn farmers hurt by the trade conflict with China — and that might pay political dividends for President Trump in farm-belt states such as Iowa; under the decision to be made public Friday, the Environmental Protection Agency will allow gasoline with a 15% mix of ethanol to be sold year-round, instead of just eight months a year, effective as soon as it is published in the Federal Register, which officials expect to happen within days.

Global grain consumption will grow faster than supply in the 2019-20 season, the International Grains Council said Thursday, a combination that would squeeze inventories for a third straight year; the intergovernmental organization forecast that grain consumption would rise 1.2% from a year prior to 2,192 million tons, driven by a 1.5% increase in industrial grain usage; total grain supply, a combination of production and the previous year’s stockpiles, is expected to grow by only 0.4%; as a result, the IGC said grain inventories will continue to run down, falling by 2.4% to 602 million tons at the end of the 2019-20 season.

— Seeding of the 2019 crop is nearing completion, with the majority of the crop being planted this month; ninety-two per cent of the crop is now seeded, up from 73 per cent last week and well ahead of the five-year average (2014-2018) of 83 per cent for this time of year

Selected highlights from a report issued by a U.S. Department of Agriculture attache in China

—The Fall Armyworm – a crop-eating pest – first detected in China in January 2019 has now spread across 15 Chinese provinces and currently impacts about 90,000 hectares (1.35 million mu) of grain production

Recent dry weather in Argentina gave momentum to wheat planting for the 2019-20 season, which began last week and would cover 6.4 million hectares, the Buenos Aires Grain Exchange said; by Wednesday, farmers had planted 7.7% of the planting area

—The grains exchange said that 90.7% of the soybean planting area for the 2018-19 had already been harvested; production is expected to total 56 million tons

—Argentine producers have also harvested 37.4% of the commercial corn planting area for the 2018-19 season, which will produce a record harvest of 48 million ton

Brazilian mills will buy at least 5.5 million tons of wheat from Argentina in 2020 and 2.25 million tons of the grain between June and November this year, the Argentine government said after a meeting with counterparts in Brazil; the announcement comes months after Brazil spooked Argentine farmers when it agreed to import 750,000 tons of wheat from the United States and other countries outside the regional Mercosur block, waiving the 10% levy normally applied.

Farm office FranceAgriMer estimated in a weekly report on Friday that 79% of soft wheat in France, the European Union’s biggest crop producer, were in good or excellent condition by May 20, unchanged from a week earlier; that compared with an 80% score for soft wheat crops at the same stage last year

—rated 76% of French winter barley as good/excellent, up from 75% a week earlier, while the equivalent spring barley rating was stable at 88%.

—For corn, the good/excellent score declined to 81% from 83%; sowing of grain maize was 99% complete versus 97% a week earlier

South Korea said Friday that it is scrambling to prevent the spread of the highly contagious African swine fever on its pig industry after North Korea confirmed an outbreak at a farm near its border with China.

—Malaysia’s palm oil exports during the May 1-31 period are estimated up 7.1% on month at 1,688,422 metric tons, cargo surveyor AmSpec Agri Malaysia said 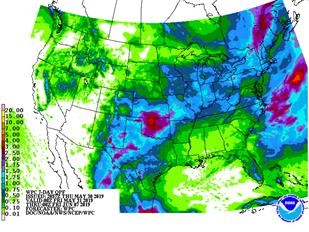 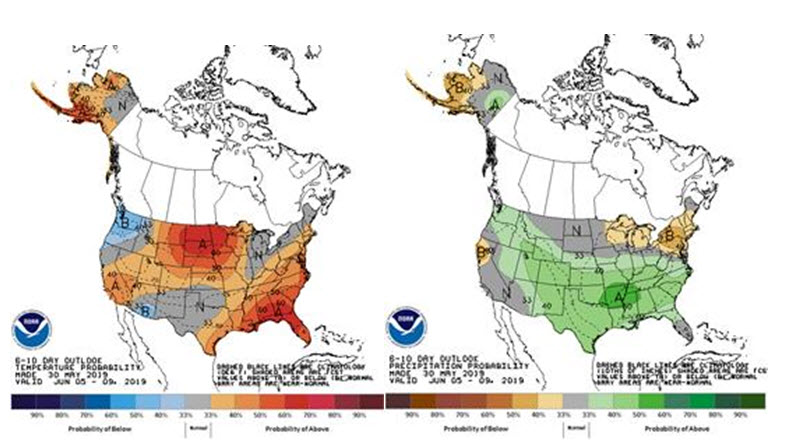 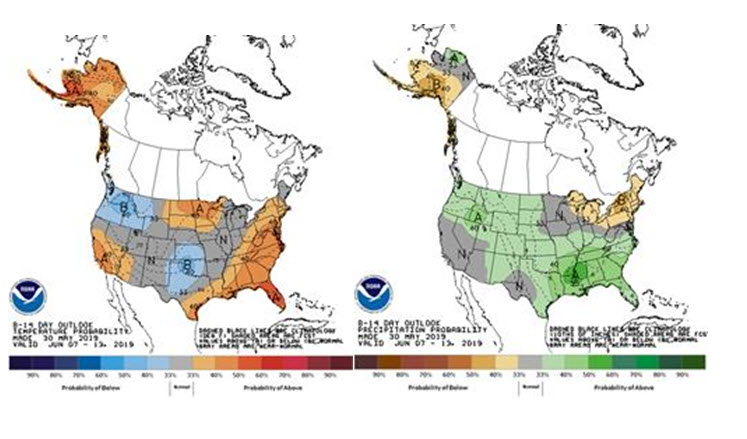