No one knows how this virus will play out. All we know is that right now the markets are devaluing as speculators and people that do not belong in our business get out. Many of which are probably meeting margins on equity trades.

We also know that at some point, 1. Cheap prices will cure cheap prices and unvervalued markets become opportunity. This also brings in greater demand than previously estimated as end users see opportunity. 2. The virus will clear and economies will reboot. This is already happening in China. 3. World banks and governments are bending over each other to dole out money. End run…potential inflation which is actually what the Feds want.

Corn 355 and below – rarely traded

Buying any of these markets near those levels should offer long term opportunity without excessive risk. Buying fear and emotion and waiting for greed is a long term strategy that has made many people wealthy. Here is a diesel chart: 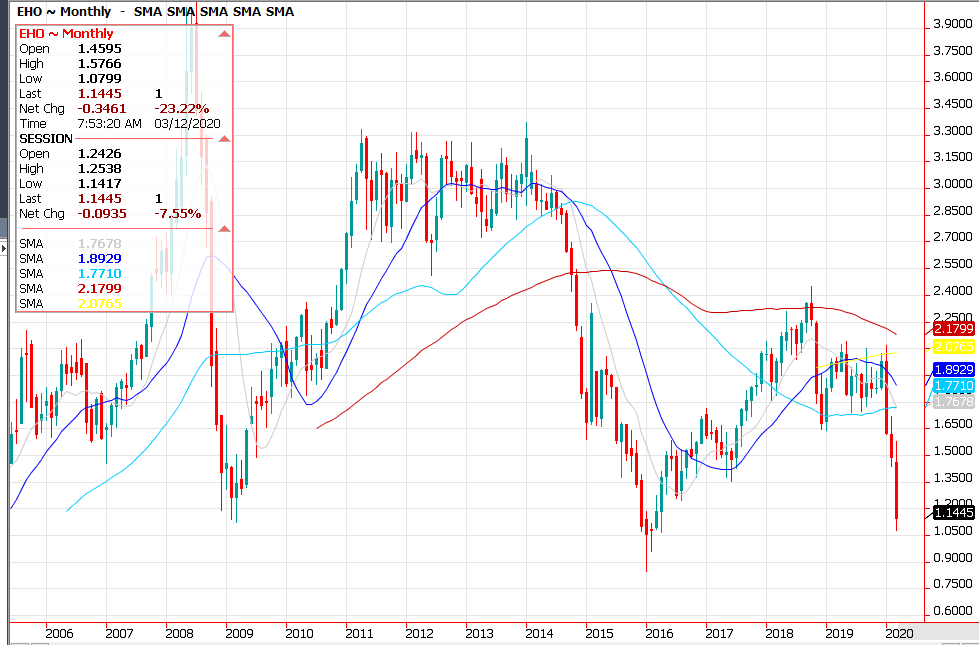 The following is from ADMIS

Malaysian palm oil prices were down 80 ringgits at 2,279 (basis May) on continued global financial fears.

Market talk. There is no way of knowing where all this will end. Risk appetite has disappeared, dramatic (panic) action is being taken against Covid-19 creating panic and the impact on jobs and the world economy cannot be estimated – but it won’t be favorable. Not to mention the politicians and health officials who are becoming increasingly bold in the numbers they are putting out for likely Covid-19. The virus will get worse before getting better. It will end sooner than later. People will eat. Grains will be sold. Grain will be moved. Crops will get planted. Animals will be fed. Foods will be made and consumers will continue to buy.

The U.S. Winter Wheat areas have rains forecasted mostly through the next week. The U.S. Midwest forecast has rain systems moving through the region through the end of next week

The Argentine weather forecast has rainfall expanding over the growing regions over the next 5 days.

Exchange operator CME Group on Wednesday said it would close its Chicago trading floor after business hours on Friday to reduce large gatherings that can contribute to the spread of the coronavirus.

Wire story was reporting corn exports from the United States hit a nine-month high in February and although sales have picked up in recent weeks, annual shipments could still fall short of already-light industry expectations; ever since U.S. corn prices jumped last year amid the rain-induced, record late planting, the world’s top supplier has struggled to sell the yellow grain on the international market; monthly exports have been running notably below recent averages since June, but that changed in February.

China said on Thursday that the impact of the coronavirus pandemic on global supply chains will pressure Chinese exporters and importers as they look to pick up the pace of business resumptions amid fewer reported disease cases; but authorities will act to stabilize China’s foreign trade, adding that they would support Chinese firms to expand imports of key raw materials to cope with the supply chain disruptions.

Selected highlights from a report issued by a U.S. Department of Agriculture attache in Buenos Aires:

Ukraine exported 42.32 million tons of grain crops and legumes since the beginning of the 2019/2020 marketing year (MY), which is 24.5% higher than over the relevant period in the previous MY

—Ukraine’s exports of flour over the reporting period grew by 42.4%, to 261.6 thousand tons

This year Kazakhstan will reduce the areas under grain and legumes by 200,000 hectares

Farm office FranceAgriMer increased its forecast for French soft wheat exports outside the European Union this season for the sixth month in a row, saying it saw no immediate impact from a coronavirus outbreak on brisk demand for French supplies

—The office now expects France, the EU’s biggest grain producer, to ship 12.7 million tons of soft wheat outside the bloc in the 2019/20 season to June 30

—That compares to a projection of 12.6 million tons last month; the revised wheat export forecast was 31% above last season’s volume

Australia has exported a record 1.3 million mt of wheat in January, a massive 41% increase month on month, and a 52% rise from a year ago, according to export data seen by S&P Global Platts.