Chinese Ag futures (September) settled down 21 yuan in Soybeans, down 15 in Corn, unchanged in Soymeal, down 68 in Soyoil, and down 66 in Palm Oil.

The Malaysian Palm Oil market was down 43 ringgit at 2,026 (basis August) on any lack of price optimism over the short term.

As the U.S.-China trade dispute increasingly heats up, analysts from J.P. Morgan and Morgan Stanley say it’s looking likely that there will not be a deal at the G-20 summit in Japan this month. The summit has been cast as a possible opportunity for a trade deal, with market watchers expecting that both Presidents Donald Trump and Xi Jinping would attend

The U.S. Midwest weather forecast looks to continue with above average rainfall favoring the south over the next 10 day; rainfall to the north looks to run below average this week and mixed for next week—temps will be running average to below average.

The Southern U.S. Plains looks to have an above average pattern of precip over the next 10 days—temps will be running below average.

The Northern U.S. Plains will continue with a drier pattern over the next 10 days—temps will be running average to above average.

The U.S. Delta and the Southeast will see less frequent and less significant rainfall but it will not be completely dry.

Managed Money on Commitments Report, as of Tuesday, May 28th, was—–

Wire story reports record-slow corn planting in the United States has caused speculators to quickly erase their massive short bets in Chicago-traded corn, and they likely closed out last month with a bullish stance on the yellow grain 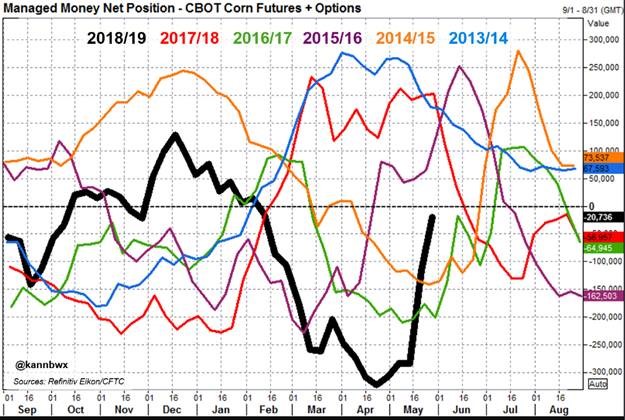 U.S. soybean crushers likely processed 5.101 million short tons of soybeans in April, or 170.0 million bushels, according to the average forecast of eight analysts surveyed ahead of a U.S. Department of Agriculture (USDA) report; it would be down from a 179.4 million-bushel crush in March and the 171.6 million bushels crushed in April 2018

U.S. soyoil stocks at the end of April were seen rising for a fifth straight month to 2.261 billion lbs; if realized, that would be up from 2.233 billion lbs at the end of March and the largest in nine months.

For the week ended May 23rd, U.S. All Wheat sales are running 9% ahead of a year ago, shipments up 6% with the USDA forecasting a 3% increase on the year

—By class, HRW wheat sales are up 1%, shipments 9% behind with a USDA forecast of a 12% decline

U.S. Corn sales are running 11% behind a year ago, shipments 5% ahead with the USDA forecasting a 6% decline on the year

U.S. Soybean sales are running 17% behind a year ago, shipments 25% behind with the USDA forecasting a 17% decline on the year

—Soymeal sales unchanged on the year, shipments 3% ahead with a 2% decline forecasted

—Soyoil sales 15% behind a year ago, shipments 13% behind with a 12% decline forecasted

The Trump administration on Friday lifted restrictions on the sale of higher ethanol blends of gasoline, keeping a campaign promise to farmers suffering from the trade war with China but drawing a legal threat from the oil industry; the announcement will allow gasoline stations to sell blends containing up to 15 percent corn-based ethanol, called E15, year-round, ending a summertime ban that President Barack Obama’s Environmental Protection Agency imposed in 2011 to reduce smog pollution.

—The decision by the Trump administration to lift restrictions on selling gasoline blended with up to 15% corn-based ethanol is expected to have a bullish effect on corn prices, as the ability to sell the gasoline blend year-round is expected to boost corn consumption by ethanol producers; the decision was lauded by the agriculture industry

The U.S. Chamber of Commerce is looking at ways to challenge U.S. tariffs on Mexican goods, including legal options, an official with the influential business lobbying group said on Friday as a broad swath of industries reeled in response to a plan announced by U.S President Donald Trump on Thursday.

—Farm groups warned the Trump administration against moves that could bring retaliatory tariffs from Mexico and again impede exports to one of the top markets for U.S. crops and meat

—The Mexican government should target agricultural goods produced in states that have voted for U.S. President Donald Trump’s Republican Party if the trade conflict between the two neighbors worsens, the head of Mexico’s main farm lobby said; such retaliatory measures should only be applied as a last resort and that he supports the Mexican government’s efforts to first seek a negotiated settlement to the dispute

The Rally in Soybean Prices In May Is Probably Overdone

—US weather calamities may lead to declining world soybean output next season; record global stocks as of 1 Sept 2019 will mitigate production losses

—Most of the increase in oilseed crushings will be in soybeans in 2019/20, limiting the growth in world production of seed oils

—Record stocks are likely to keep world supplies of rapeseed & canola near all-time highs in 2019/20, limiting the bullish impact of the looming further decline of production

Total 2018-crop wheat quantity outstanding into the government’s 9-month price support loan program are 38.348 million bushels, a decrease of 1.063 million bushels during the week ended May 27

The latest U.S. tariffs on Chinese imports will not resolve the two countries’ trade issues, and the United States bears responsibility for setbacks in the talks process, a policy paper published by the Chinese government said; China can ensure good momentum for sustained economic development and economic prospects for the country are “extremely optimistic”; China will not concede on issues of principle

China’s corn acreage is forecast to fall to 41.63 million hectares this year and next, a recent agricultural report; corn output will likely retreat 1.2 percent year-on-year to 254 million tons this year; farmers have a strong willingness to expand the growing areas of soybean, as soybean subsidies remain higher than corn subsidies; corn consumption is expected to hit 283 million tons, down 0.2 percent year on year; the report also forecast that the wholesale prices of corn will keep at 1,750 yuan (about 257 U.S. dollars) to 1,850 yuan per ton.

China has agreed to take palm oil worth nearly $150 million from Malaysia in a barter deal, media said citing a Malaysian minister; Malaysia will export 1 billion yuan ($144.87 million) worth of palm oil, or about 200,000 tons; in return, Malaysia will receive construction services, natural resources products, and civilian and defense equipment from China.

Brazilian mills will buy at least 5.5 million tons of wheat from Argentina in 2020 and 2.25 million tons of the grain between June and November this year, the Argentine government said after a meeting with counterparts in Brazil; the announcement comes months after Brazil spooked Argentine farmers when it agreed to import 750,000 tons of wheat from the United States and other countries outside the regional Mercosur block, waiving the 10% levy normally applied.

Brazil is expected to harvest 100.4 million tons of corn in the 2018/19 season, agribusiness consultancy Agroconsult said on Friday, raising its forecast by almost 2 million tons after a tour of the country’s main growing regions.

Buenos Aries Exchange reported Argentine producers have harvested 37.4% of the commercial corn planting area for the 2018-19 season, which will produce a record harvest of 48 million ton.

—said that 90.7% of the soybean planting area for the 2018-19 had already been harvested; production is expected to total 56 million tons

Russian grain inventories continue to drop, supporting domestic prices; stockpiles stood at 19.3 million tons at the start of May, a 29% fall from a year before, according to Moscow-based agriculture analyst; wheat stocks dropped 33% to 11.4 million tons and “remain significantly below 2018 in all federal districts.”; as a result of the declining inventories, domestic grain prices are falling more slowly than might be expected given expectations that the new crop will be a bumper one

—Ukraine has exported 3.94 million tons of sunoil so far in the 2018/19 season which runs from September to August, analyst APK-Inform said; sunoil exports totaled 3.69 million tons in the same period in 2017/18.

Ukrainian grain exports from sea ports in the week of May 25-31 fell to 663,000 tons from 932,000 tons a week earlier, the APK-Inform consultancy said; the country has exported almost 42 million tons of wheat, corn and barley so far this season, which runs from July to June; that is up from 32.8 million tons in the same period in 2017/18.

Consultancy Strategie Grains cut its monthly forecast of the 2019 rapeseed harvest in the European Union to 17.8 million tons from 18.85 million a month ago; that compares with an estimated 2018 crop of 20.0 mln t; other analysts have also reduced their outlook for this year’s EU rapeseed harvest as crops continue to see the effects of a poor start to the growing season, marked by drought and insect attacks

—In its monthly oilseed report, Strategie Grains increased its forecast for EU rapeseed imports in the upcoming 2019/20 season to 5.4 million tons, compared with 5.1 million expected a month ago and 4.1 million expected in 2018/19.

Farm office FranceAgriMer estimated in a weekly report on Friday that 79% of soft wheat in France, the European Union’s biggest crop producer, were in good or excellent condition by May 20, unchanged from a week earlier; that compared with an 80% score for soft wheat crops at the same stage last year 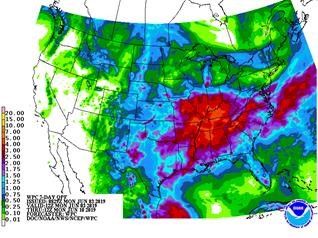 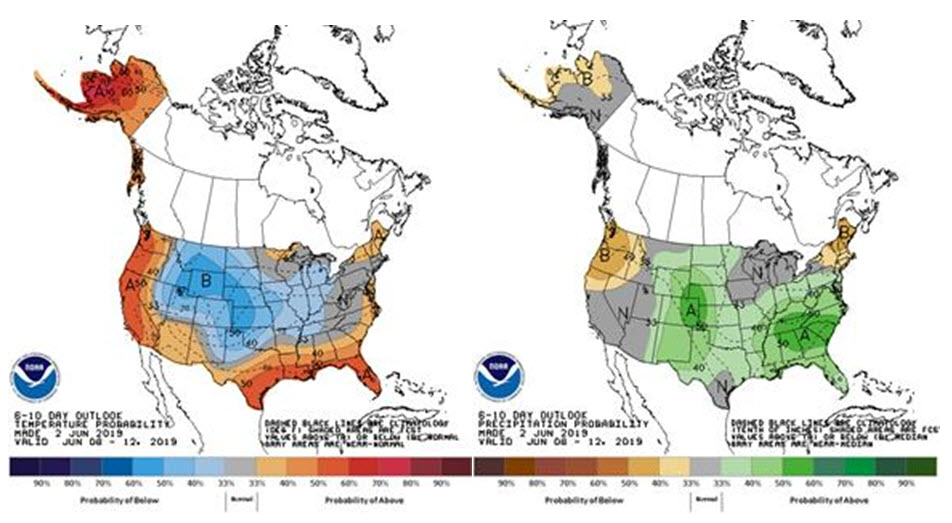 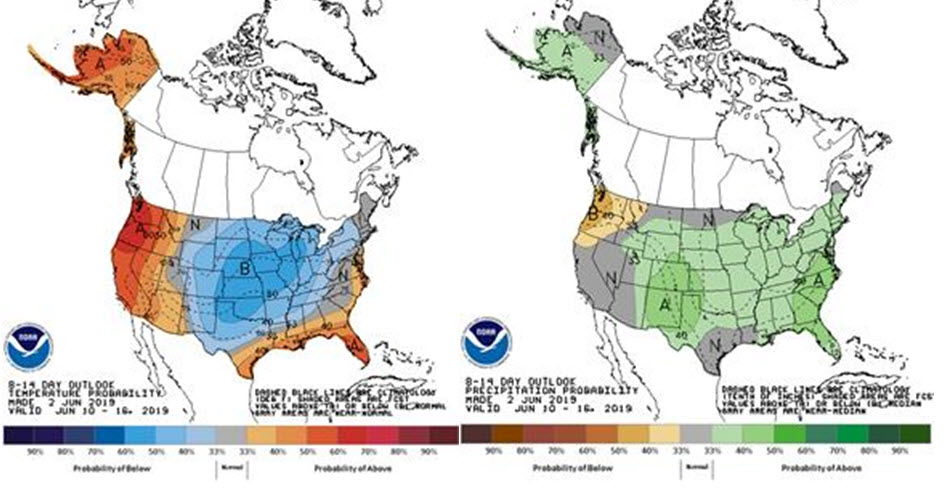