Wheat prices overnight are down roughly 3 cents in the SRW Wheat, down 3 in HRW, and unchanged for HRS; Corn is down 2 cents; Soybeans up 2; Soymeal down $0.50, and; Soyoil up 35 points.

Corn, wheat and soybean futures remains range bound awaiting news on US and  China trade talks and South America weather. Early week trade is about supple issues. Also this week, news US exports prices are competitive offered support. Wednesday may be more about demand especially US export with corn and wheat sales to date below pace to reach USDA goal and soybean exports remaining above pace to reach USDA goal.

The Malaysian Palm Oil market was up 65 ringgit at 2,687 (basis February) on lower output forecasts.

The U.S. Midwest weather forecast doesn’t have much change as widespread precip is seen for the region midweek; turning quiet by Friday into early next week; then rains to return the middle of next week. The 6 to 10 day temp outlook is a bit below average for the region.

The South American weather forecast for Brazil in the 6 to 10 day outlook is still for rainfall to be seen across most areas. Argentina has rains for most areas early next week before quieting down the rest of next week. Temps continue to run near average in most of South America over the next 10 days.

Wire story reports soybean trade between the United States and China has been disrupted for nearly a year and a half as the trade war rages on, but the extent to which an official pact would benefit the U.S. side largely depends on the details inside; restoring trade to the previous conditions and allowing China to purchase U.S. soybeans and other agricultural goods when the market is favorable is probably the optimal outcome. 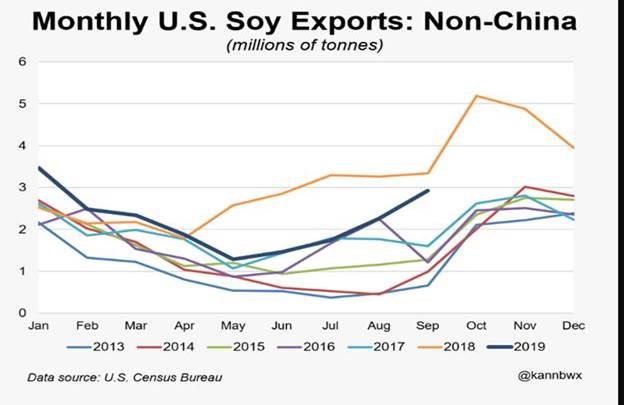 Estimates for November USDA Cattle-On-Feed Report; the U.S. Department of Agriculture report is scheduled for release at 3 p.m. ET Friday

The United States has reached an agreement ensuring the largest ever volume of guaranteed market access for U.S. rice exports to South Korea, U.S. Trade Representative Robert Lighthizer and Agriculture Secretary Sonny Perdue said on Tuesday; under the agreement, South Korea will provide access for 132,304 tons of U.S. rice annually at a value of about $110 million

CHINA SELLS 50,958 TONNES OF WHEAT, OR 1.68% OF TOTAL OFFER, AT AUCTION OF STATE RESERVES -THE AVERAGE SELLING PRICE OF WHEAT IS 2,326 YUAN PER TONNE – TRADE CENTRE

Russia will boost its exports of grain in the second half of the current agricultural year (January-June 2020) despite the intensification of competition, according to the president of the Russian Grain Union; at the beginning of the season, we look very weak in our export positions; in any case, the market will get its share; in the first half, we gave the market away to our competitors, but in the second, we’ll take this market; the world can’t get by without our wheat

Australia’s wheat and dairy outlook has deteriorated in recent months as a result of an ongoing drought, says Fitch Solutions; it now forecasts Australian wheat production for 2019-20 to be 18 million metric tons compared with a previous forecast of 21 million metric tons; Fitch sees further downside risks to its revised forecast as the drought conditions are evenly spread across the country compared with last year.

Chances of below-average rains across southern Africa are threatening the region’s main cereal and grain planting season, says U.S.-funded research group FEWS NET; in recent years, droughts have contributed to poor cropping, watering and pasture conditions even in nations such as South Africa and Zambia, which usually produce surplus grain

Top palm oil producers Indonesia and Malaysia will see little growth in output next year, potentially leading to a supply deficit and higher prices, leading industry analyst James Fry said; Indonesia, the biggest producer, will grow production by 2%-3% next year, adding that output will be hurt by drought and lower fertilizer use; the outlook for Malaysia’s production growth was also bearish, he said, although he did not provide estimates