Wheat prices overnight are down roughly 7 cents in the SRW Wheat, down 5 in HRW, and down 3 for HRS; Corn is down 3 cents; Soybeans down 5; Soymeal down $2.00, and; Soyoil down 10 points.

For the week, Winter Wheat prices were down roughly 1 cent for Soft Red Winter, down 20 in the Hard Red Winter, and up 15 for Hard Red Spring; Corn was down 10 cents; Soybeans down 21; Soymeal down $9.00, and; Soyoil down 25 points (crushing margins were unchanged at $1.30, oil-share was unchanged at 30%).

The U.S. Midwest weather forecast has close to average rainfall over the next  10 days with some rainfall systems intermittently but, not to the extent that has been seen over the past couple months—temps will be running average to below average.

The Southern U.S. Plains sees above average rainfall occurring over the next 10 days—temps will be running below average during the period.

The Northern U.S. Plains will see close to average precip over the near term—temps will be running average to below average most of this week warming to above average for the weekend and early next week.

The U.S. Delta will be dry through the workweek, but northern areas will get rain this weekend and periodically into next week; U.S. southeastern states will receive rain frequently into Thursday and then change to a more erratic pattern for the following ten days. 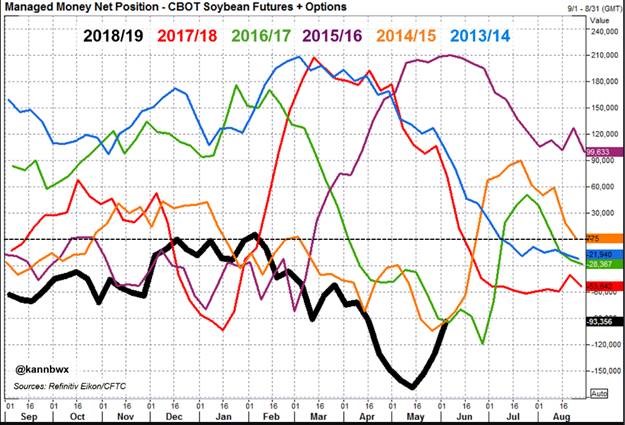 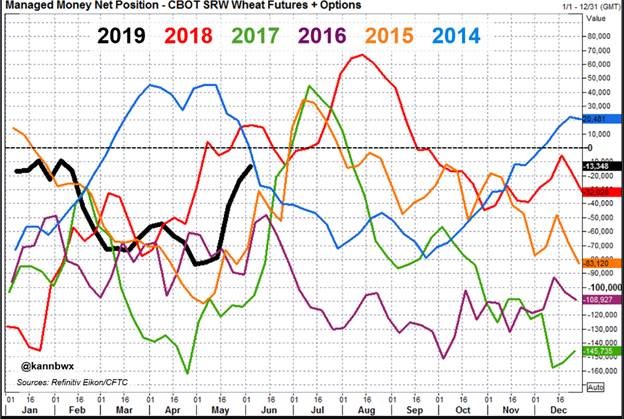 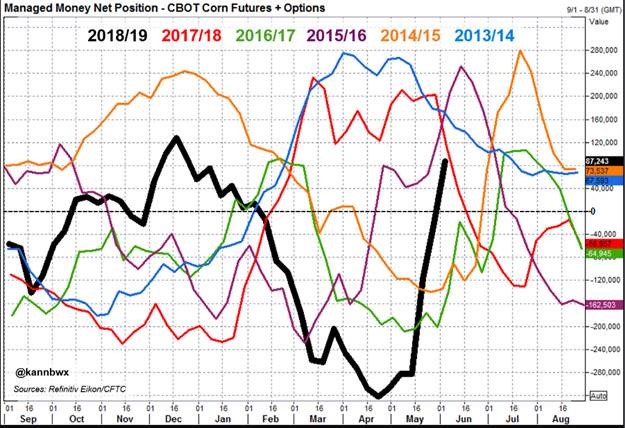 U.S. President Donald Trump said on Friday that he has indefinitely suspended the threat of tariffs against Mexico after reaching “a signed agreement” on immigration; Mexico, in turn, has agreed to take strong measures to stem the tide of Migration through Mexico, and to our Southern Border.; the United States and Mexico will continue discussions on illegal immigration and if the measures in the agreement “do not have the expected results, they will take further actions” and announce them within 90 days

—U.S. President Donald Trump defended his administration’s deal with Mexico against criticism that there were no major new commitments to stem a flow of Central American migrants crossing into the United States, and said on Sunday more details would soon be released; key aspects of the agreement are still unclear, including whether Mexico has pledged to buy more U.S. agricultural products and if the deal materially expanded a previous commitment by Mexico to more vigorously police its southern border with Guatemala

U.S. officials officially granted Chinese exporters two more weeks to get their products into the United States before increasing tariffs on those items, according to a U.S. government notice; the United States Trade Representative had earlier announced the planned move on May 31; in the official notice published in the Federal Register, USTR said it was extending the deadline from June 1 to June 15 for certain products to enter the United States without being subject to an additional 25 percent tariff.

Speculators have been on a record buying streak in Chicago-traded corn in recent weeks, but that likely stalled out late last week as many U.S. farmers got a break in the rains to continue the historically slow planting effort; in the week ended June 4, hedge funds and other money managers switched to a net long position in CBOT corn futures and options from their net short a week earlier, according to data from the U.S. Commodity Futures Trading Commission

New Price Volatility Likely in the Weeks Ahead

—Soya oil exports from the USA and South America are up from a year earlier; sharp increases in shipments to India, China, Bangladesh, Pakistan and North Africa

China’s soybean imports fell 24 percent in May from the same month last year, Reuters calculations based on customs data showed on Monday, as higher tariffs on U.S. cargoes and outbreaks of African swine fever checked demand; China brought in 7.36 million tons of soybeans in May, down from 9.69 million tons last year; that was also down from 7.64 million tons in April.

Affected by the China-U.S. trade friction, China’s soybean and pork imports from the United States fell heavily while those from other countries posted significant growth, the Ministry of Commerce (MOC) said Thursday.

—In the first four months, China’s soybean imports dropped 7.9 percent year on year, with imports of U.S. soybeans plunging by over 70 percent from a year ago to 4.31 million tons

—In contrast, the country’s soybean imports from Brazil jumped by 46.8 percent and those from Argentina saw a 23-fold growth to 2.15 million tons during the same period

Brazilian chicken exports to China grew by 49% in May compared to the same period last year as the Asian nation imported more meat to deal with an outbreak of African swine fever (ASF) that has impacted domestic production; Brazil shipped 381,100 tons last month to overseas customers, a 14.4% increase; China represented almost 15% of shipments and was Brazil’s main chicken export destination last month

Selected highlights from a report issued by a U.S. Department of Agriculture attache in Russian Federation:

—Assuming normal weather during the growing season, FAS/Moscow forecasts Russia’s wheat production in marketing year (MY) 2019/20 at 79.0 MMT, which is almost 7.0 MMT higher than last year due to an increase in winter wheat planted area and lower expected rates of winterkill; exports are forecast at 37.5 MMT, which is up from the previous year; Russia is expected to be the top global wheat exporter for the third consecutive year.

—The country has exported almost 42.8 million tons of wheat, corn and barley so far this season, which runs from July to June; that is up from 33.4 million tons in the same period in 2017/18

—However, the agriculture ministry said last week’s exports totaled 47.3 million tons so far in the 2018/19 season

—Ukraine has exported 4.16 million tons of sunoil so far in the 2018/19 season which runs from September to August; sunoil exports totaled 3.79 million tons in the same period in 2017/18

Kazakhstan has exported 10.4 million tons of grain and flour in grain equivalent this marketing year (July 2018 to June 2019) according to preliminary information, head of the Kazakh Agricultural Ministry’s Department said

—in the 2018-2019 marketing year, we exported 10.4 million tons of grain and flour in grain equivalent, or 1.4 million tons more than in the previous year

—In the next marketing year (July 2019 to June 2020), Kazakhstan plans to export 8-9 million tons of grain and flour in grain equivalent

Selected highlights from a report issued by a U.S. Department of Agriculture attache in India:

—No significant changes in the PSD for rice, wheat and corn to report; despite forecast record production, MY 2019/20 government wheat procurement fell behind last year on higher purchasing by private trade; the Government of India raised the import duty on wheat to 40 percent on April 26, 2019; fueled by back-to-back bumper harvests and strong procurement over the last two years, food grain (rice and wheat) stocks held by the government on June 1, 2019, are estimated to reach a record 84 million metric tons, creating significant storage challenges 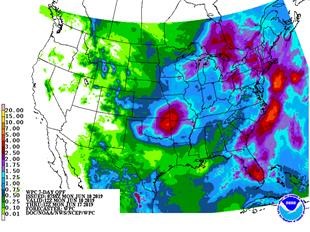 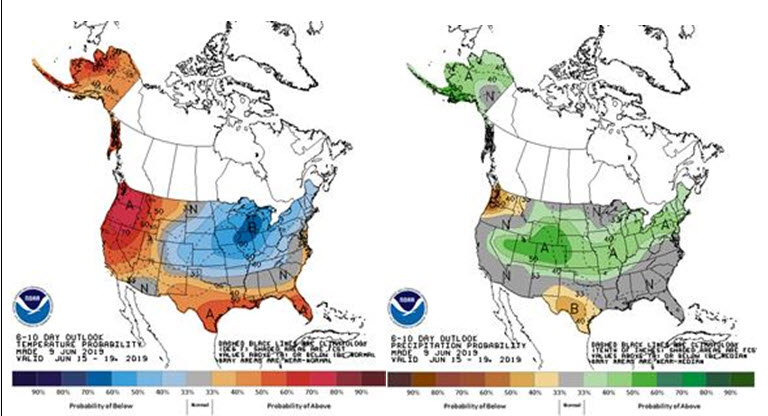 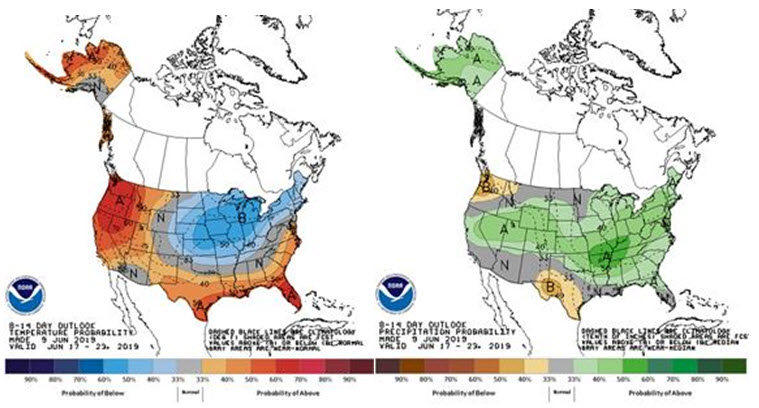