Wheat prices overnight are down roughly 7 cents in the SRW Wheat, down 5 in HRW, and down 1 for HRS; Corn is down 4 cents; Soybeans down 5; Soymeal down $2.00, and; Soyoil down 10 points.

The Malaysian Palm Oil market was down 29 ringgit at 2,027 (basis August) returning from holiday with losses on a stronger ringgit; await next week’s monthly trade data.

The U.S. Midwest weather forecast is still a bit drier than it has been but, still enough rains will be falling; systems look to move through the south today and tomorrow; Sunday-Monday has a system for the Midwest; another comes through Wed-Thur; and yet another front next weekend bringing widespread coverage of moderate to light rainfall—-temps will be running average to below through the period.

The Southern U.S. Plains has a fairly close to average rainfall pattern over the next 10 days—temps will be running below average.

The Northern U.S. Plains continues with a favorable pattern over the near term—-temps will be running average to above average for most of the period.

The U.S. Delta and the Southeast will see wet weather through the Delta through Sunday and into Tuesday in the Southeast; a drier pattern returns and will continue into the following week.

The White House is standing firm on its position that Mexico must make take significant new steps to halt the surge of Central American migrants by Monday, or face tariffs on its exports to the United State; we are still moving forward with tariffs at this time.

For the week ended May 30th, U.S. All Wheat sales are running 9% ahead of a year ago, shipments up 8% with the USDA forecasting a 3% increase on the year

—By class, HRW wheat sales are up 1%, shipments 6% behind with a USDA forecast of a 12% decline

—U.S. Corn sales are running 13% behind a year ago, shipments 4% ahead with the USDA forecasting a 6% decline on the year

—U.S. Soybean sales are running 16% behind a year ago, shipments 25% behind with the USDA forecasting a 17% decline on the year

—Soymeal sales unchanged on the year, shipments 2% ahead with a 2% decline forecasted

—Soyoil sales 14% behind a year ago, shipments 13% behind with a 12% decline forecasted

Wire story reports with three months to go in the current marketing year, U.S. soybean exporters may struggle to ship the government’s full-year forecast by Aug. 31 given the recent slower-than-needed pace; more sales and healthy shipments will also be required for U.S. corn exports to meet the annual target set by the U.S. Department of Agriculture, though many analysts believe that peg to be too high; data published on Thursday by the U.S. Census Bureau showed U.S. soybean exports at 2.4 million tons in April; corn shipments for the month reached 5.5 million tons. 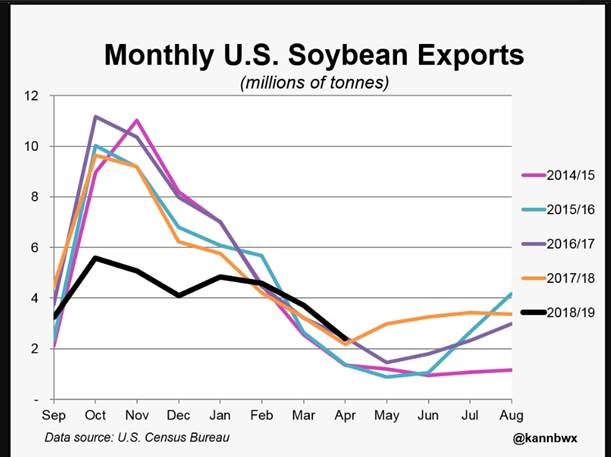 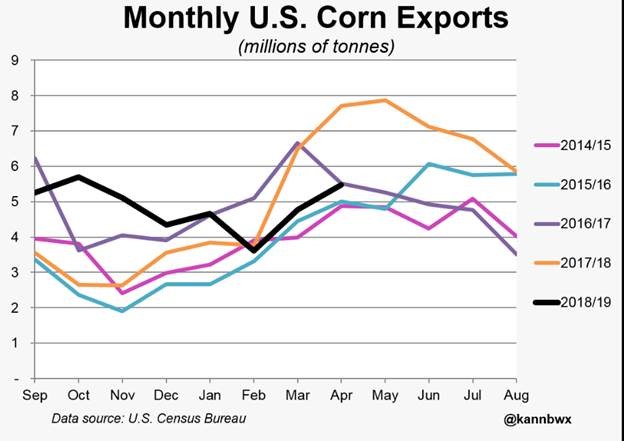 Wire story reported based on the way that condition scores are formulated and the record-slow crop progress, the agriculture market may be at risk of low-balling the health of the U.S. corn crop when the government publishes its first assessment on Monday; the second risk involved is that better-than-expected corn conditions, if realized, could push the market into complacency, potentially easing production fears just a little too much; market participants need to understand what the condition scores are and are not reflecting, or else they may be drawn to faulty conclusions when the U.S. Department of Agriculture releases the first scores on Monday at 3 p.m. CDT.

Canada has shipped the most wheat to China in 14 years, contrasting a sudden halt in canola trade amid a diplomatic dispute between the countries, as Chinese buyers shunned the United States; China bought 1.5 million tons of wheat from Canada from August 2018 through April 2019, nearly double the pace a year earlier and the most since 2004-05, according to Canadian Grain Commission data; China’s brisk wheat buying from Canada, even as it refuses canola and detains two Canadian citizens, shows that supply and demand, not just politics, factor into that diplomatic dispute.

—Seeding operations are mostly complete across the province, but there are a few fields still being seeded for green feed and silage; all six crop districts in the province are reporting that 99 per cent of the crop is in the ground; compared to 92 per cent last week and the five-year average (2014-18) of 93 per cent for this time of year; topsoil moisture conditions continue to deteriorate across the province due to strong winds and lack of moisture.

Corn prices in China are near their highest levels in four years, the result of falling domestic production at a time of tense relations with the country’s major trading partners; since January, prices of three-month corn futures on the Dalian Commodity Exchange have gained 10% to about 2,000 yuan ($289) a metric ton; they were last at those levels in the summer of 2015, months before the Chinese government ended a long-running program that had provided minimum-price support to the country’s corn farmers; after the government’s price guarantees were eliminated, Chinese corn prices fell to decade lows because the country had accumulated massive stockpiles of the commodity that needed to be sold down ($1 = 6.9159 yuan)

—China will allocate 500 million yuan ($72 million) for fall armyworm prevention and control, to secure its grain production throughout the year, the country’s agriculture ministry said

Argentina’s wheat planting area in the 2019/20 season could hit the highest level in two decades thanks to a spike in local grains prices due to heavy rains affecting the United States Midwest, the Argentine Wheat Association said; spanning at least 6.8 million hectares, the wheat area would be the largest since it hit 7 million hectares in the 2001/02 cycle; the price of wheat rose 10% in the last month in Argentina, driven by the outlook for higher international demand due to doubts about the quality of U.S. winter wheat, which competes with Argentine grain; the price hike improves prospects for Argentine farmers who had a record production of 18.7 million tons last season from the 6.3 million hectares planted.

Farm office FranceAgriMer estimated in a weekly report on Friday that 80% of soft wheat in France were in good or excellent condition by June 3, up from 79% a week earlier; that compared with a score of 79% for soft wheat crops at the same stage last year.

—Some 98% of the soft wheat crop had reached the heading stage, up from 80% the previous week but below the 100% at the same stage a year earlier.

—For corn, the good/excellent score rose to 82% from 81%; sowing of grain maize is complete

India’s oilmeal exports in May edged down 78 percent from a year earlier to 58,549 tons as shipments of soymeal fell from the last year’s lower base, a trade body said.

Flour millers in Asia have been caught on the wrong side of a rally in wheat prices as they waited for the market to decline, a stark contrast to animal feed producers who booked cargoes of corn several months before prices for that grain jumped

—Most Asian wheat importers are covered for supplies until July, but purchases of cargoes for August arrival are less than 50-percent complete; that compares with corn importers, who have locked in supplies for arrival up to October

—Black Sea wheat with 11.5 percent protein is currently being quoted at $225 a ton, including cost and freight (C&F), compared with deals done at $210 a ton before the rally in May

—Meanwhile, corn buyers bought the bulk of their supplies at around $180-$190 a ton, C&F, in February and March, for shipment from May to October; corn prices were quoted at $215 a ton, C&F, this week 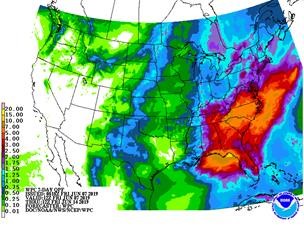 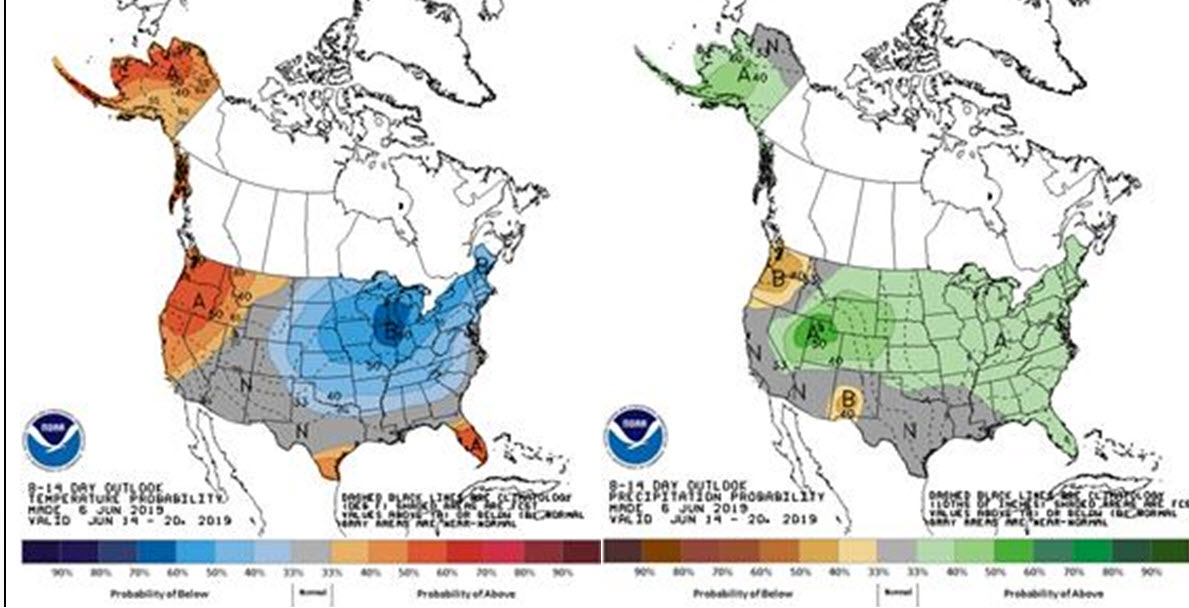