Malaysian palm oil prices overnight were up 3 ringgit (+0.15%) at 2011, climbing for a second day on optimism over export demand and as firmer crude oil prices made the tropical oil more attractive for blending into biofuel.

The U.S. Midwest weather forecast has wet weather returning to the Midwest this weekend, favoring Illinois, Indiana and Ohio. Another system rolls through early next week, which should cover the eastern Plains, Midwest and eastern corn-belt states. The seven day total is expected to be 1 ½ to 3 inches. This could continue to delay soybean plantings in Illinois, Indiana, Ohio and Michigan.

The U.S. Southern Plains weather forecast should continue to see warm temperatures with a slightly drier trend into the second half of June.

Japan bought 37,293 tonnes of food-quality wheat from Canada in a regular tender that closed late on Thursday.

Jordan’s Silos and Supply General Company has issued an international tender to buy 25,000 tonnes of milling wheat. The tender deadline is July 1 and is for shipment in the first half of September.

Philippine importers have issued an international tender to purchase around 55,000 tonnes of feed wheat.

Millers in the Philippines this week bought 110,000 tonnes of feed wheat for arrival in July and August.

Turkey’s state grains board TMO has issued a series of international tenders to purchase a total of 100,000 tonnes of corn.

Indian state-run trading company MMTC has for the fifth time postponed the deadline for offer submissions in an international tender to import Non-GMO yellow corn, this time to June 19.

Basis bids for corn and soybeans shipped by barge to the U.S. Gulf Coast were mostly steady to firm on Thursday, with spot values holding their steep premium to deferred shipments amid lingering shipping problem on flooded Midwest rivers. Several soybean export cargoes sold to China are being rolled to August from July as river closures have deprived exporters of export-grade soybeans from the upper Midwest as available high-quality supplies from the south are getting depleted.

American officials released images they said show that Iran was involved in an attack on an oil tanker near the entrance to the Persian Gulf on Thursday, one of a pair of incidents that have raised tensions between the U.S. and the Islamic Republic over the past day.

Vietnam says about 2.5m pigs have been culled, or over 7% of the country’s herd, as African swine fever hits more locations including the financial hub of Ho Chi Minh City, says local newspaper Tien Phong, citing the agriculture ministry’s animal health department. Outbreak has been found in 3,980 communes, 407 districts in 55 Vietnamese provinces and cities. About 87% out of 63 Vietnam’s provinces and cities are infected. Damage may reach a point where a state of emergency must be declared.

African Swine Fever gene was detected in confiscated canned goods brought from Hong Kong by a returning resident according to Bureau of Animal Industry official. Viral DNA was isolated in pork luncheon meat.

Chinese soybean buyers are asking sellers in the United States to delay cargoes due to be shipped in July until August. More than 6 million tonnes have already been shipped to China, but some 7 million tonnes bought before talks broke down are outstanding. About 2 million tonnes of July are trying to be rolled  into August, said a source with direct knowledge of the matter. China would incur steep penalties if it tried to cancel the orders.

China, the world’s largest consumer of corn after the U.S., is likely to slash state sales of the commodity this year in an effort to halt the rapid depletion of stockpiles that are used to temper food inflation. It will probably sell at most 50 million tons from its temporary inventories, or about half of what it sold last year. After the sales end, which will probably be in September, less than 50 million tons is expected to be left in the stockpiles, equivalent to about two months’ consumption and the least since 2012.

Mexico will likely use significantly more US wheat this year despite growing unease with President Donald Trump, according to Mexico’s main wheat chamber. Wheat shipments from Russia are also expected to repeat last year’s big jump in volume, while Argentine wheat is seen gaining as Mexico continues to diversify its suppliers. Mexico relies on imports for about two-thirds of domestic demand. Overall, Mexican wheat imports will “very likely” be between 5.1 and 5.2 million tonnes, up from 4.9 in 2018, boosted by a 4 percent jump in domestic demand, said Jose Luis Fuente, head of the CANIMOLT wheat chamber. U.S. wheat imports are forecast by the chamber to reach between 3.5 and 4 million tonnes, or as much 40 percent higher than last year.

France’s FranceAgriMer estimates 80% of French soft wheat crops were in good or excellent condition in the week ending June 10, unchanged from last week and 76% last year. Corn good/excellent score was stable at 82%.

Crude palm oil (CPO) price is expected to continually be depressed by record low soyabean oil price, arising from an escalating United States-China trade war and African swine fever, said analysts. MIDF Research had a CPO target price of RM2,090 per tonne. Kenanga Research believes CPO production will dip 5% month-on-month to 1.59 million tonnes due to Hari Raya festival. Exports are expected to decline 15% month-on-month to 1.45 million tonnes as the buying from India, EU and US slowed.

Malaysia’s palm oil stockpiles for last month rose 12.8 per cent YoY to 2.4 million tonnes, in line with both Bloomberg and Reuters consensus. MIDF Research said the monthly inventory level had been increasing on a YoY basis for the past 23 months since July 2017.

Argentine Crop Estimates as of June 13

Ottawa increased the insurance coverage available for canola exporters as it seeks to reduce trade risks amid a dispute with China. China halted purchases of Canadian canola in March, citing pests in shipments by Richardson International Ltd. and Viterra Inc.

Additional rain is expected in nations including U.K., France, Germany and Poland through early next week, boosting conditions for crops including corn and sunflowers, forecaster Maxar says.

Hot weather is forecast for areas in China’s north until Sunday, according to the country’s National Meteorological Center. Temperatures in part of North China plain and most of the areas along the Yellow River and Huai River could reach as high as 37 degree Celsius (98F). The dryness may affect corn in these areas after harvest of wheat is completed.

In the U.K., recent heavy rain may raise disease risk for cereal crops, CRM AgriCommodities says in a note.

Dry spell is seen persisting across southern Spain according to Maxar. Spain’s grain production is seen falling amid dryness according to Grupo GOF. 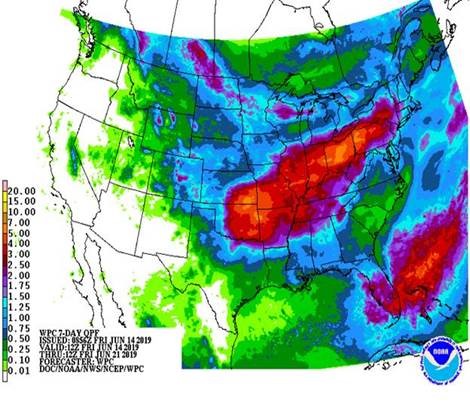 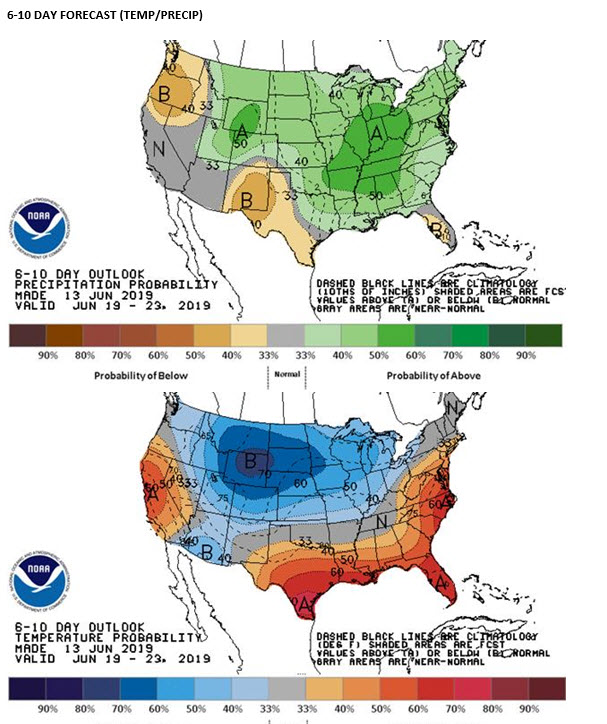 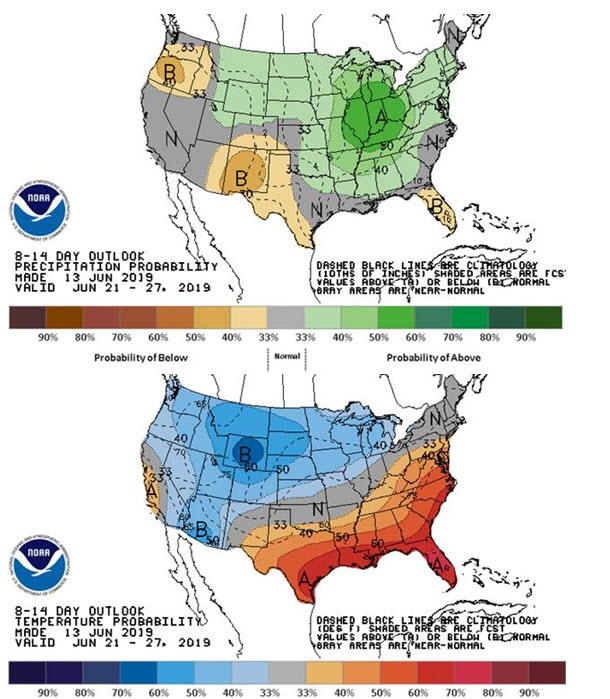