Analysts said fears that U.S. production will not meet official estimates due to the recent wet weather were

driving gains in prices. “Lower yield forecasts are a good reason for corn prices to rally,” said Tobin Gorey, director of agricultural strategy, Commonwealth Bank of Australia. Wheat is down more than 1.5% for the week, set for the first weekly loss in six weeks. Despite edging down, soybeans are up nearly 2% for the week, on course for their second straight weekly gain. Soybean traders are turning their attention to next week’s G20 summit, where U.S. President Donald Trump and his Chinese counterpart Xi Jinping are expected to meet.

An ongoing trade war between Washington and Beijing has slowed U.S. soybean exports to China, the

world’s top importer of the oilseed.

Last night’s GFS model run was notably less wet in Minnesota and northwestern Wisconsin Sunday into Monday; significant rain will still impact many areas of the Corn Belt through Monday; a ridge of high pressure will then build into the United States helping to cause a decrease in the significance of rain in the region in the last few days of June; thunderstorms will still occur

—-the model shows the ridge of high pressure a little stronger Jun. 27 – 30 compared to the midday model run with its center still over New Mexico and part of West Texas and the southwestern Hard Red Winter Wheat Region; the ridge will still be dirty with some erratic thunderstorm activity occurring beneath it and more well-organized thunderstorms moving over top the northern extent of it in areas such as the Northern Plains 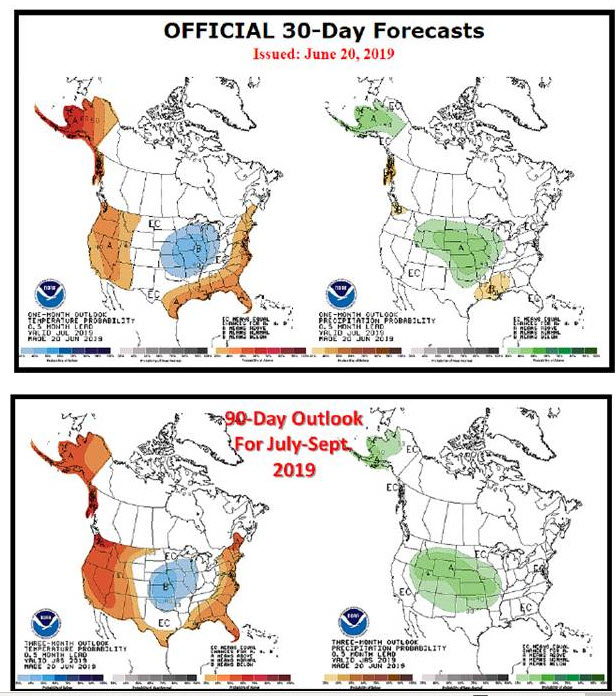 China said on Thursday it hoped U.S. officials would bring a problem-solving attitude to renewed trade talks in advance of a meeting between Presidents Donald Trump and Xi Jinping next week in Japan; China’s fundamental demands must be met; U.S. must stop threatening tariffs, waging trade war – ministry

The USDA says that it will allow farmers to work cover crops planted on acres of farmland previously declared as prevented planting acres earlier this year, in an effort to help service land damaged by flooding and excessive moisture; farmers may now begin haying, grazing, or chopping these fields on September 1, two months ahead of the usual date; cover crops are used by farmers in order to maintain fields that would normally be used for cash crops like corn.

For the week ended June 13th, U.S. All Wheat sales are running 27% ahead of a year ago, shipments up 10% with the USDA forecasting a 5% decline on the year

U.S. Corn sales are running 14% behind a year ago, shipments 1% behind with the USDA forecasting a 10% decline on the year

U.S. Soybean sales are running 16% behind a year ago, shipments 24% behind with the USDA forecasting a 20% decline on the year

—Soyoil sales 15% behind a year ago, shipments 16% behind with a 12% decline forecasted

Wire story reports U.S. crop tour suggests lots of last-minute planting in the east; corn and soybean planting is usually nearing completion in Illinois, Indiana and Ohio by early June; but these major producing states were on a record-slow pace three weeks ago with planting deadlines fast approaching, and many market participants worried that millions of acres could go unplanted as a result; while the crops in these states are critically behind schedule in terms of development, there is evidence to suggest that more acres may have been planted than some analysts might believe, and many of these fields were likely sown within the last three weeks. 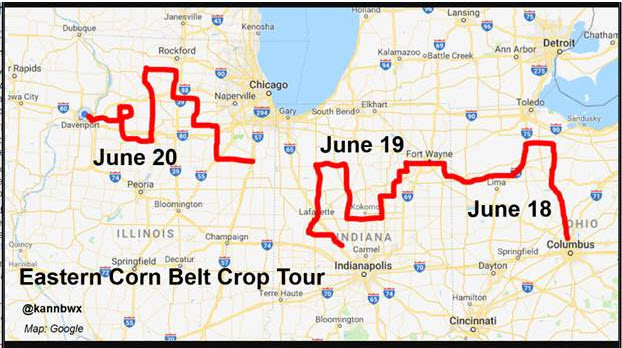 American farmers are a force to be reckoned with; fresh from a trip to Iowa, President Trump has sent Environmental Protection Agency Administrator Andrew Wheeler and Agriculture Secretary Sonny Perdue to the drawing board, according to The Wall Street Journal; they are meant to come up with a plan that could make further changes to ethanol policies that would benefit farmers; this comes at a time of rising corn prices following damaging floods.

Hog prices have cooled after a mounting toll from African swine fever in China and other Asian countries pushed prices sharply higher in the spring, but Tyson Foods expects them to resume their climb later this year as Chinese buyers begin booking orders ahead of Chinese new year in 2020; the true impact’s going to be later this fall for shipment near the end of this calendar year saying that China for now has been drawing upon its frozen pork supplies in cold storage.

—Some of the areas of the province received rain last week; however, many of the areas in desperate need of moisture received little to no rainfall again; the rain will help to relieve dry soil conditions in the areas where it fell, and encourage germination and growth on cropland, hay land, and pasture; the amount of rainfall varied significantly across the province, with many small, localized showers rather than wide-ranging precipitation; across the province, 56 per cent of fall cereals, 48 per cent of spring cereals, 52 per cent of pulse crops, and 36 per cent of oilseed crops are at their normal stages of development for this time of year

Millions of pigs have been culled in China and Vietnam as a U.N. food agency urges Asian governments to make containing virulent African swine fever their top priority; with an announcement by the U.N. Food and Agricultural Organization that infections have spread to Laos, some experts are saying it is the largest animal disease outbreak in history; the FAO said in a report late Thursday that more than 3.7 million pigs had been culled in China since the outbreak began there last August; Vietnam has been the hardest hit, culling at least 2.6 million pigs followed by China, which reported more than 1.1 million; all the figures were provided to the FAO by governments of countries affected by the epidemic.

Ukraine has begun harvesting early grain crops, the press service reported; in general, 404,000 tons of grain of the new harvest have been threshed from 133,000 hectares (1%) with the yield being 30.3 centners per ha; in addition, Ukrainian farmers began harvesting winter rapeseeds and threshed 6,000 tons from an area of 4,000 hectares (the yield is 15.3 centners per ha).

Farm office FranceAgriMer estimated in a weekly report on Friday that 80% of French soft wheat crops were in good or excellent condition in the week ending June 17, unchanged from a week earlier; that compared with a score of 75% for soft wheat crops at the same stage last year

Malaysia kept its export duty on crude palm oil for July unchanged at 0%, according to a circular on the Malaysian Palm Oil Board’s website; the duty has been at 0% since September. 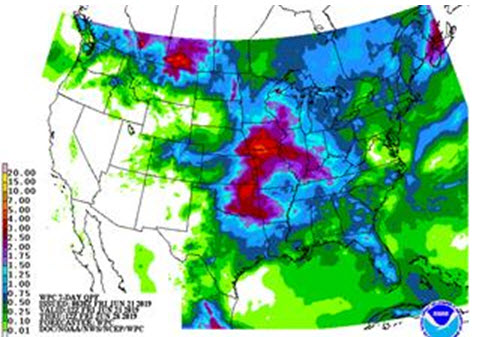 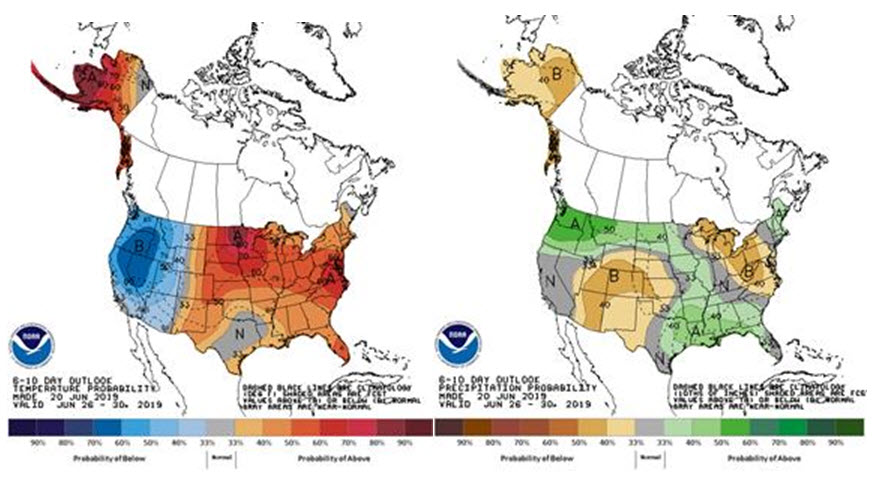 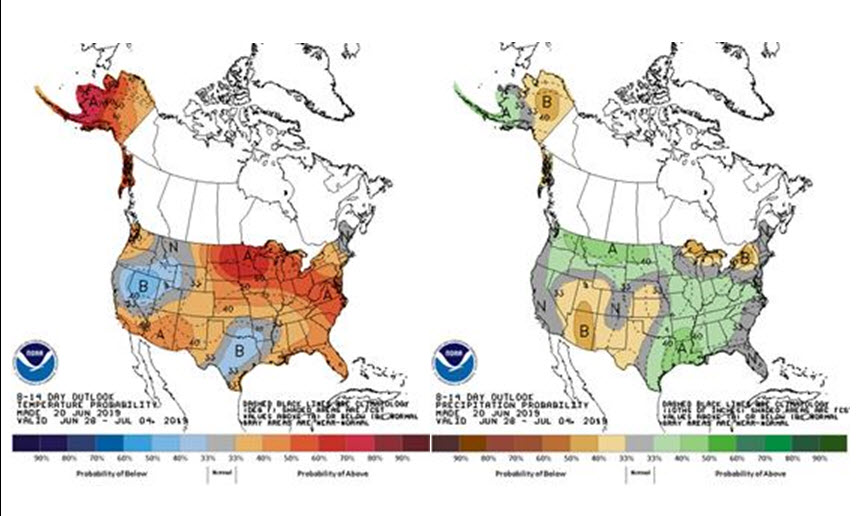