Malaysian palm oil prices overnight were up 20 ringgit (+1.00%) at 2029, as the Malaysian currency weakened, making ringgit-denominated palm cheaper for overseas buyers. Still, gains were limited by concerns over the decline in Malaysia’s exports in the first half of June.

Chicago corn futures climbed more than 2% on Monday to a five-year top as more rains and flooding in parts of the U.S. Midwest are likely to curb output in the world’s biggest producer of the grain. Wheat rose to a nine-and-a-half-month peak while soybeans advanced more than 1%, gaining for a sixth consecutive session. The most-active corn contract on the Chicago Board of Trade was up 2.3% at $4.63-1/4 a bushel, near the session high of $4.64 a bushel – the highest since June 2014. “The market is finding new ‘horror stories’ about U.S. corn crops as it scours the U.S. Midwest for information,” said Tobin Gorey, director of agricultural strategy, Commonwealth Bank of Australia. The storms have left millions of acres unseeded in the $51 billion U.S. corn market and put crops that were planted late at a greater risk for damage from severe weather during the growing season. Together, the problems heap more pain on a farm sector that has suffered from years of low crop prices and a U.S.-China trade war that is slowing agricultural exports. End-users of corn, such as producers of livestock feed and ethanol, have been bidding up for old-crop supplies to prepare for tighter domestic inventories.

The seven-day forecast continues to look wet for the much of the Corn Belt. On Saturday, heavy rains fell from eastern Iowa to Ohio and also covered much of Oklahoma, parts of northern Texas, southeastern Kansas and southern Missouri.

Turkey’s state grain board provisionally bought a total of about 100,000 tonnes of corn in a series of international tenders that closed on Friday.

Taiwan has issued an international tender to purchase 83,200 tonnes of grade 1 milling wheat to be sourced from the United States.

Philippine importers have issued an international tender to purchase around 55,000 tonnes of feed wheat.

Turkey has issued a series of international tenders to purchase a total of 100,000 tonnes of corn.

Jordan has issued an international tender to buy 120,000 tonnes of milling wheat which can be sourced from optional origins.

Syria’s state grains agency has issued an international tender to purchase and import 200,000 tonnes of milling wheat to be sourced from Russia only.

US Commerce Secretary Ross downplayed the prospect of a major trade deal emerging from a possible meeting between President Donald Trump and Chinese President Xi Jinping at the G 20. “I think the most that will come out of the G-20 might be an agreement to actively resume talks,” Talks between China and the U.S. broke off in early May.

Japan, has decided not to suspend wheat imports from the U.S., even after genetically engineered plants that are unapproved for commercial production were discovered in Washington state.

Traders are expecting this afternoon’s Crop Progress report to show corn plantings anywhere from 89% to 92% complete. With heavy rains in the eastern Corn Belt region this week, the planting season has effectively ended. Soybean planting progress is expected to come in near 79%-83% complete.

Growers are expected to file insurance claims on 2.2 million unplanted soybeans acres according to the average estimate among analysts. While some farmers still have time to plant, the estimate would be just below the record of 2.23 million acres that couldn’t be plant with soy in 2015.

China is facing a food shortage that’s raising prices for consumers. African swine fever is decimating China’s pig population. The country’s stock fell 21%, or by nearly 73 million pigs, from March 2018 through April 2019, according to official statistics. Unofficially, however, industry experts whisper about slides of more than 40% to 50%. That would be comparable to wiping out all the pigs in the U.S. and Europe combined. Compounding the challenge is the invasion of fall armyworm in the lead-up to the autumn harvest. Traveling up to 60 miles a day, the crop-eating pest is expected to be present in all Chinese provinces by the end of the year.

Indian Meteorological Department (IMD) reports there is only 51 per cent chance of normal and above normal in its second long-range forecast predicting a normal Southwest Monsoon for 2019. Thus, major Soybean producing states may face dry spell during the season may affect production. 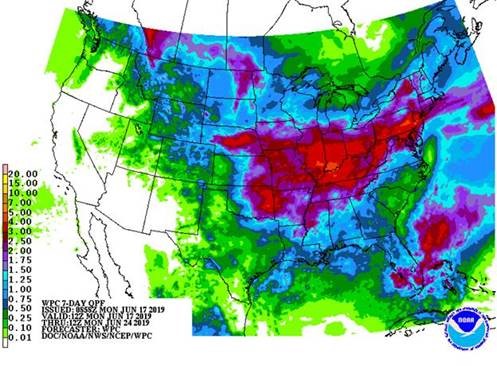 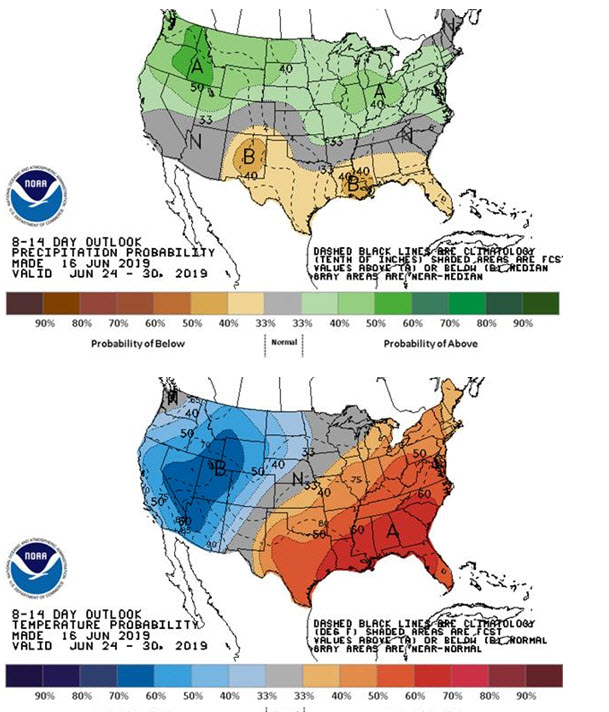